Oregon’s Sick Leave Laws: What it Means for Employers

In 2013 the City of Portland passed a city-wide sick leave law.

With the passing of the Oregon Sick Leave law statewide, Eugene voted to repeal their sick leave law. The City of Portland’s sick leave law merged into the statewide law. Oregon’s new law preempts local laws, which prevents a similar maze of sick leave laws such as is found in Washington or California or New Jersey.

Employers can restrict an employee from using accrued sick leave for the first 90 days of employment. Note, In July 2017 Oregon clarified many questions that were unanswered in the sick leave law.

Employers must provide sick leave at the rate of 1 hour for every 30 hours of time worked. Employees can earn up to 40 hours of protected time in a year.

If the employer is considered a small employer, then the employee earns unpaid sick leave.

Worked time includes overtime hours. Exempt employees are considered to work at the rate of 40 hours a week for the purposes of accruing sick leave.

Employees should also make reasonable efforts to schedule sick leave when it is less disruptive to their employer and to give proper notice of foreseeable sick leave usage.

Rate of Pay for Sick Leave

It does include differential pay.

Oregon’s Sick Leave Law applies to almost all employees who work in the State of Oregon in a year.

This includes part-time and full-time employees.

The only exceptions to the Oregon Sick Leave law are independent contractors and employees who receive sick leave under Federal law. This includes Federal Contractors.

Oregon’s allowable uses for sick leave track under the Oregon Family Leave Act (OFLA). Leave may be taken for sickness, injury, health condition, or for a medical diagnosis.

Employees can use sick leave for preventative care. This includes the employee’s or their family member’s health condition, injury or illness.

The employee may use sick leave for several other reasons. Employees can use sick leave to bond with an infant, newly adopted child, or foster child. They can use it to care for a child who needs home care. It can be used to make funeral arrangements, attend the funeral, or grieve for a family member who has died.

Employees can use sick leave to seek law enforcement assistance for themselves or a dependant because of sexual assault, domestic violence, or stalking.  This includes obtaining counseling and other services from a victim service provider. It includes relocation or taking any steps to secure an existing home after being a victim of domestic violence, harassment, sexual assault, or stalking.

Lastly, employees can use sick leave when there is a public health emergency or if the employee is excluded from the workplace for health reasons. The Oregon law also has a provision that allows employees to donate accrued sick time to other employees for allowable uses. However, employers have the option of allowing employees to donate sick time or not. 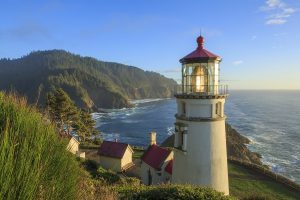 Oregon provides a broad definition of family relationships for qualifying sick leave usage. A family member includes both an employee’s spouse and a same-gender domestic partner.

Parents, including custodial and noncustodial, foster, adoptive, biological, stepparents, parents-in-law, and parents of a domestic partner are also included in the law. Additional allowed family relationships include grandparents, grandchildren, or in locos parentis.

The law recognizes biological, adopted, foster, and step relationships. It also recognizes the family relationships through a same-gender domestic partner, including children and parents.

Oregon does not allow for a sibling or other extended family relationships not named above to be used for the sick leave usage. Children can be minors or adults at the time that sick leave is taken.

Oregon doesn’t require that employers pay out unused sick leave when employment is terminated. However, employees do retain a sick bank leave for 180 days after leaving an employer.

Employers are allowed to choose between the accrual and front loading method for providing sick leave. If the employer front loads sick leave, then they must front load 40 hours of sick leave at the beginning of the year.

Under the front loading method, employees do not carry over unused sick leave to the following year. Their sick bank is reloaded at the beginning of the year. New employees hired part way through the year would be front-loaded at a prorated amount.

If the employer chooses the accrual method, then employees must be allowed to roll up to 40 hours of unused sick leave to the following year. Employers can cap the rolled amount to 40 hours a year and the total accrual to 80 hours a year (40 for the previous year and 40 for the current year).

Employers must be consistent in their policy for all employees.

Employers who provide Paid Time Off (PTO) of at least 40 hours a year and who allow employees to use PTO in accordance with Oregon’s Sick Leave Laws are not required to provide any additional sick leave to employees.

It would be beneficial for employers who do provide PTO to examine their allowable uses of PTO and modify it in accordance with Oregon Law.

If an employer provides less than 40 hours of PTO each year, then the employer can still use PTO toward Oregon required Sick Leave, but must allow the employee to earn the remaining sick leave provided under state law for sick leave purposes. The key is if the PTO policy is ‘substantially equivalent or more generous” than the state law.

If an employee uses 3 or more consecutive days for sick leave, then the employer may require verification that sick leave was used in accordance with the law. The employer is required to pay all costs that aren’t covered by health insurance.

Employees who assert or who attempt to assert their rights under Oregon’s Sick Leave laws are protected from retaliation from their managers or employers. This includes any retaliative actions against an employee who legally uses sick leave or the withholding of benefits, promotions, or other incentives.

Employers must provide each employee with a notification of the new Sick Leave Law. Notices must be provided in the language that the employer normally communicates with the employee. New employees must be notified by the first payday of employment.

Notices can be distributed personally, by email, mail or in the paycheck. Lastly, notices must be incorporated into the employee handbook and must be posted in a conspicuous place. Notices can be found on Oregon’s website and a separate on the City of Portland’s website.

Employers must also provide employees with a quarterly update of sick time accrual and usage.

Oregon law assigns a series of civil penalties for violations of the sick leave laws. Violations include failure to provide proper notice to employees and a quarterly statement of sick leave accrual.

Businesses who have employees in Oregon and Portland will need to maintain accurate records to show compliance with the City and State’s sick leave laws. Electronic records are much more accurate and can be maintained for Additionally, these businesses have to also comply with Federal Overtime Laws, the Family Leave Medical Act and any other national or local laws that are enacted.

SwipeClock provides a comprehensive array of workforce management and time tracking tools that can help businesses to more easily stay in compliance with local and national laws. Records are effortlessly kept for years and accrual is automatically tracked and reported to employees according to the state and city laws. Additionally, with geo-timekeeping clocks, businesses can effortlessly track time worked in specific cities to ensure compliance.