McDonald’s to pay $3.75 Million to franchise workers creating implications for the industry.

McDonald’s has agreed to pay out $3.75 Million dollars to franchise workers in a settlement of a lawsuit that claims that McDonald’s violated California’s labor law. This is the first time that franchise workers have successfully sued the company and it could have some major implications not only for McDonald’s but for the entire fast food industry. At the heart of the debate is the question of whether or not McDonald’s should be considered a joint employer.

Why is Joint Employment such a big factor?

Joint employment is not a question that plagues any of the thousands of McDonald’s corporate owned restaurants. Those employees are directly hired by McDonald’s. Rather, the question is whether McDonald’s is responsible for the working conditions of the many thousands of employees at the franchise locations across the country.

In the past, franchise workers have not been allowed to unite against McDonald’s. Although there have been repeated attempts by unions and other groups to unite workers against McDonald’s in various lawsuits, the US District Courts have held to the stance that McDonald’s is not a joint employer with the franchise owners. Joint employment exists when an employee has two employers, in this case the franchisee and the parent company. In a joint employment, both employers are responsible for employee conditions both individually and jointly.  McDonald’s has long held that they are not a joint employer with their franchisees and even after this current settlement, they continue to maintain that stance.

If workers are able to unite, their position will be greatly strengthened. In the past, workers have not been allowed to unite across various franchise owners, which has meant that any class action lawsuit would end up being hundreds or thousands of individually filed lawsuits. If McDonald’s is declared a joint employer, then workers across the country and any of its thousands of franchisees could unite and hold the corporation responsible.

How has 2016 been of great impact to McDonald’s and franchise employees?

In March, McDonald’s went to court in New York to appeal a decision by the National Labor Relations Board (NLRB) that ruled that McDonald’s was a joint employer of franchise employees. McDonald’s disputed that ruling and it was expected to go to court earlier this year in March. That dispute is still ongoing. 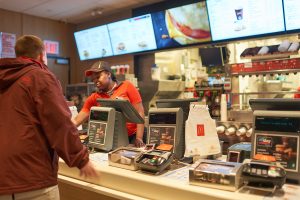 History of the New York Suits

The New York dispute against the NLRB started when New York franchise employees united in protests of what would become the fight for $15 movement. They claim that Franchisee owners and managers then threatened them and warned them not to talk to protest organizers or participate in the protests. They claimed that they were threatened with their jobs if the protests continued.

Meanwhile, in July, a California judge ruled that over 400 workers could file a class action lawsuit against McDonald’s. The final number ended around 800 employees. All 800 workers are employed by a single franchisee. The lawsuit accused McDonald’s of failing to pay overtime pay, failed to pay minimum wage, and mis-recorded time cards.

McDonald’s has agreed to pay out a settlement on the suit, but does not agree that it means they are a joint employer with franchisee owners. McDonald’s spokeswoman Terri Hickey said Monday that “We entered into this mutually acceptable resolution to avoid the costs and disruption associated with continued litigation.”

California has recently passed a flurry of labor laws including introducing paid sick leave across the state. Cities across California have been passing new minimum wage and increased sick leave laws. Berkeley is the most recent of the cities to pass new minimum wage laws. Coupled with new Federal Overtime Laws that take effect December 1, employers have a lot of new labor laws to juggle.

California has often led the country in public policy, including labor laws. Although the California suit did not find a resolution in the courtroom, the fact that a judge ruled and allowed franchise employees to sue McDonald’s could have legal implication on the New York case and on other cases across the country. If McDonald’s is found liable as a joint employer, then it could be held liable for all wage disputes, overtime hours and labor law violations of the franchise owners. In the California case, McDonald’s will now be responsible to train its Franchisees and to ensure that they are using the proper software and accounting systems to properly record timekeeping and pay payroll.